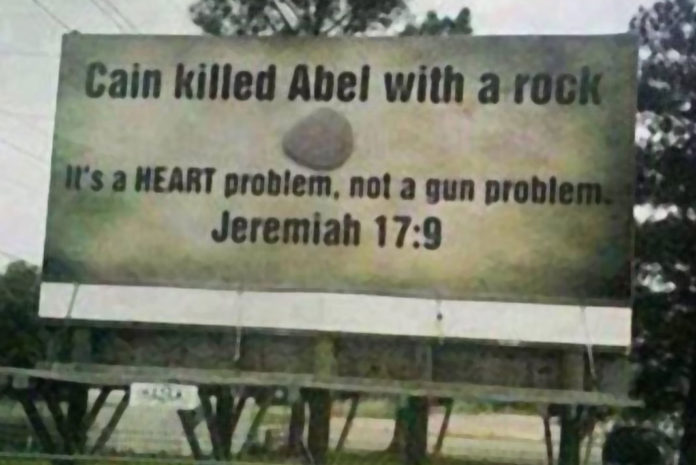 A billboard reads “Cain killed Abel with a rock. It’s a heart problem; not a gun problem. Jeremiah 17:9” I first shared this graphic on Facebook on October 3, 2015, after yet another school shooting. What came next was a brief but emotionally-charged conversation over gun control. A polarizing issue; some folks clamor for it while some reject the idea outright.

I say the gun, the bomb, the sword—they’re all just inanimate things with no minds or ill-will of their own. The issue is the intent behind their invention, continued production and use. If there was a true respect for life in humanity, there would be no need or desire for these things to even exist.

As I’ve entered a period of regeneration in my Christian walk, I’ve been getting clear on God’s guidance in regards to the hot topics that face our fallen world today. One of the ways I have been doing this has been by plugging into learned teachers of the Christian faith like Greg Bahnsen, Joel McDurmon of American Vision and Jeff Durbin of Apologia Church.

Since I’ve begun voraciously listening to the Apologia Church crew via their Apologia Radio broadcast, I’ve stumbled over a troubling pro-gun, anti-legislation stance that isn’t sitting well with me. I normally really respect the apologetic training and message these folks are producing. Their work has been vital in helping me clarify what I believe and why I believe it. Still, this “biblical” slant on the right to bear arms feels out of place when held up next to what is usually spot-on biblical interpretation. In his October 2015 argument against additional gun legislation, Pastor Jeff returns to one of his primary influencers, Dr. Greg Bahnsen.

During a landmark debate against Dr. James Atwood over the issue of gun control, Dr. Bahnsen attempted to illustrate God’s will for us to protect ourselves according to Scripture. The examples he gives are the following:

Exodus 22:2 – Killing a thief found breaking and entering.
While lethal force is not actually condoned by God here, this passage provides legal advice depending upon whether the thief breaks in during the night or by day.

Judges 15 – The story of Samson killing many Philistines with the jawbone of an ass.
This revenge story seems to be an account of God’s justice being meted out upon the Philistines through Samson’s berserker rage.

Nehemiah 4 – The builders of the wall armed themselves.
A historical account of the steps Nehemiah’s men took to protect themselves as they worked on the wall; not a call to arms by God. Though Nehemiah trusted God would support their efforts, he and his men were still worldly enough to hold fast to their weapons.

Luke 11:21 – “When a strong man, fully armed, keeps his palace; his goods are in peace.”
When taken in full context, this reads a bit differently. The text goes on to say, “But when someone stronger than he attacks him and overpowers him, he takes away from him all his armor on which he had relied and distributes his plunder. He who is not with Me is against Me; and he who does not gather with Me, scatters.” The exegesis here is a reference to Satan being overcome by Christ and being “plundered” of his stolen souls. If anything, Christ is pointing to Satan’s error by trusting in his own power; not telling us we should go out and follow Satan’s self-reliant example.

Luke 22:36 – Where Jesus told His disciples to buy a sword.
Here Jesus is setting the stage for one of his last lessons before his death. Christ does not condone the use of the sword. This is evident when he admonishes the overzealous apostle for cutting off the ear of the high priest’s servant (Luke 22:49-51). Just as certainly as he understands his anointing for burial (Matthew 26:12) and foretells his betrayal (Luke 22:22-23), he obviously foresees the lesson of the sword. This is why he orders the apostles to produce a sword, even if they must sell their cloak and buy one (Luke 22:36). When they offer two, his response is, “It is enough.”

So, I don’t agree with Bahnsen and I don’t agree with Durbin and company. I don’t believe God ever redacted that pesky sixth commandment “Thou shall not kill” (Exodus 20:13, Deuteronomy 5:17). When the Israelites were led out of Egypt, did you ever notice it was God that doled out the justice? Not once was an Israelite citizen commanded to pick up a weapon and smite their enemy. I believe Scripture when I read:

For this is the message you heard from the beginning: We should love one another. Do not be like Cain, who belonged to the evil one and murdered his brother. And why did he murder him? Because his own actions were evil and his brother’s were righteous. Do not be surprised, my brothers and sisters, if the world hates you. We know that we have passed from death to life, because we love each other. Anyone who does not love remains in death. Anyone who hates a brother or sister is a murderer, and you know that no murderer has eternal life residing in him. (1 John 3:11-15)

If we stop a moment and mentally follow the time-tested litmus test of WWJD (What Would Jesus Do), I hope it becomes obvious to us Christ wouldn’t be walking the Earth today carrying a concealed pistol. And if we truly believe he is the Truth, the Way and the Life, we know it is his example we are to chase and emulate; not an apostle’s, not Nehemiah’s, not Samson’s, nor that of anyone standing behind a microphone today.

Christ’s example to us was one of shocking love and meek sacrifice to sinners; not self-defense or self-reliance. Even as he prayed in the garden, his words were “Not my will, but yours be done.” (Luke 22:42) If it is God’s will you be attacked in the dead of night, may I offer what is likely to be a grossly unpopular response to this?

God has allowed this to happen.

Lest we forget, we are not our own but His alone.

So, is deeper legislation the answer? Well, from a world-centered point of view, it may be a step in the right direction (depending upon the legislation, of course.) Through ensuring the right to bear arms, the founding fathers intended to keep a level playing field between the people and a wayward government or invading force. There is no way they could have foreseen the advances in warfare, technology and moral decline we’ve come to enjoy today. Still, this is man’s self-made law; not God’s.

So, is legislation the answer? It’s an aspirin to a headache. It treats the symptom, but it does little to address the underlying cause.

Yes, I agree tougher controls and legislation are needed in the short-term. Curiously, I’ve seen folks in this discussion make the leap to compare men and their guns with women and abortions (which is ennobled as ‘health care’).

There have been over 54,000,000 abortions in the US since it was legalized 1973. (For perspective, the WWII Holocaust killed over 11,000,000.) While gun control is definitely an issue, crazed assault weapon owners haven’t even scratched the paint in taking this many innocent lives.

I see both issues as ‘heart’ issues. Both gun control and abortion could be removed from the table completely if humanity’s heart was in the right place. The fact we mass-produce killing machines and glamorize violence in our entertainment and media is indicative of the same heart sickness we suffer when we fail to recognize the value of human life in utero.

If we, as God’s people, held a true respect for life, guns and other instruments of warfare would be reduced to relics in a museum; dusty reminders of a medieval mindset that took way too long to dry up and blow away.

This conversation on self-defense and violence is continued in the post Christian Martial Arts? The Biblical Case Against Self-Defense. 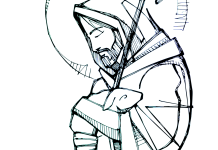 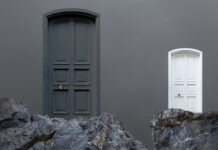 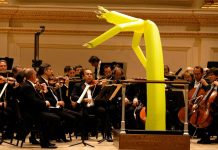